Among my friends, I’m notoriously known for my lack of sense of direction and for my ability to get lost. However, dear readers I have to tell you that if there is any genetic inheritance for sense of direction, I’d have no choice but to point the finger and blame my dad. So what happens when two people, who are both terrible with orientation have to find a place that they have never been before? I think you would have guessed the answer – we get lost (very easily). This is exactly what happened when we were trying to locate this restaurant.

We got out of the subway and actually did a full circle around the hotel building this restaurant was situated in. Then we got back to where we started and we were just about to give up, when we lifted up our heads and to our delight we saw the huge signage for this restaurant. Pheonix House actually spans three levels of the hotel and once again we got ourselves disorientated. So we ended up not at the entrance where you are suppose to get your ticket and line up, but we ended up at the third floor exit. The kind waitress informed us that they had only just opened for the day and the line was actually relatively short at the moment, so we could go down to level 1 and get ourselves a number. Coincidentally at this moment the manager appeared and very very generously let us have the first table of the day. So through all kinds of getting lost, we had somehow managed to skip the line for this very popular restaurant. The moral of the story is? Sometimes, it isn’t all that bad to be clueless of where you are.

Despite the fact that Phoenix House is ginormous, there was a constant long line all through the weekday lunch service. Don’t worry though, service at this establishment is top notch, so while you wait you will be offered complimentary hot milk tea in winter. 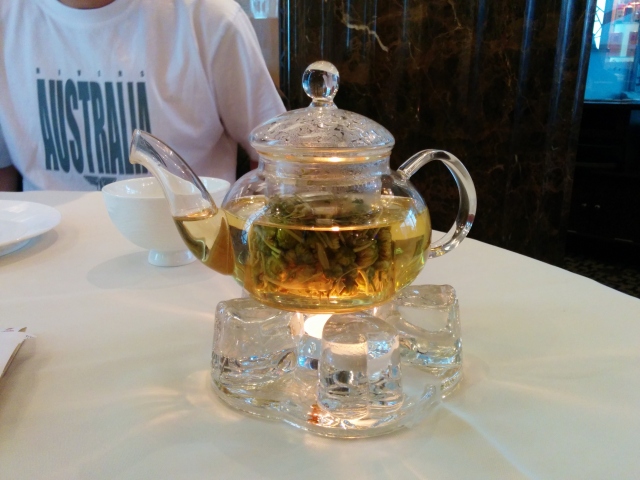 The chrysanthemum tea was light and refreshing, serving as the perfect palate cleanser all through our long meal. Our very attentive waitress for the day made sure that our tea was topped up and fresh, changing the tea leaves as needed.

All the snacks we sampled that day at Pheonix House shared a common theme and that was fine attention to detail and excellent technical execution. The above 3 snacks were all very well made, however due to the extreme excellence of the rest of the dishes we ordered they simply got overshadowed.

Just a side note, at Phoenix House you are presented with a menu and you tick and write how many of each snack you want. A lot of the dumplings and pastries are sold by the piece, so it is important to indicate exactly how many pieces of each you wanted. This was fantastic for us, because it meant that we could get a taste of a greater variety with just the two of us.

The loach is a small, bottom dwelling freshwater fish that can be quite commonly found on Chinese dining tables. This congee was perfect for battering the remaining winter chill from our bodies, it was everything a good congee should be – comforting, light and very flavoursome with the addition of fresh loaches.

Honestly, I thought these were going to be good, but nothing extraordinary, because chives and prawns were no strangers to one another. However, I was gladly proven wrong. The skin was thin and translucent, striking a balance between crispy and chewy. The prawns were extremely fresh, as were the chives. If I didn’t know there would be more good food to come, I would have ordered a dozen more of these. 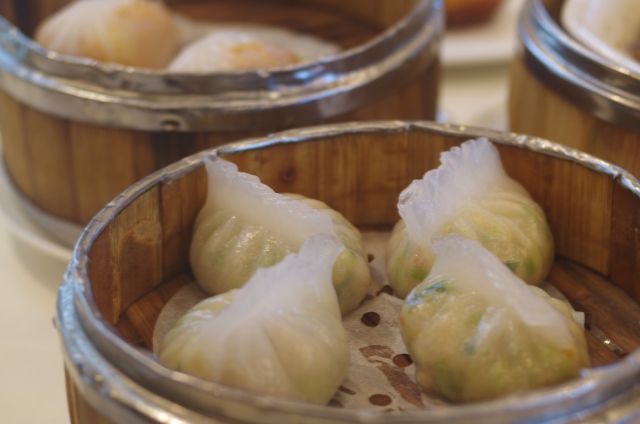 I’ve never been a big fan of the texture of fun guo, but I gave a big thumbs up to these. I especially liked the use of ground peanuts in the filling instead of whole boiled ones. Majority of the components of the filling were pre-cooked, but the spring onion pieces were added in raw then steamed, this created an interesting effect, letting a little of the strong onion flavour cut through the rich nuttiness and provided a little bit of crunch.

Trying these with dried shrimps was a new experience, since I’ve only ever had these with mince. After drying the flavour of the shrimp was intensified and tasted more of the sea. These doughnut like dumplings had a moreish, sticky inside and a crispy exterior.

The names of a lot of Chinese dishes are beautified, to make them more appealing, so therefore phoenix is often used to represent chicken. This was another yum cha staple that was executed with perfection, which made me wish for some steamed rice to mop up the salty XO braise. 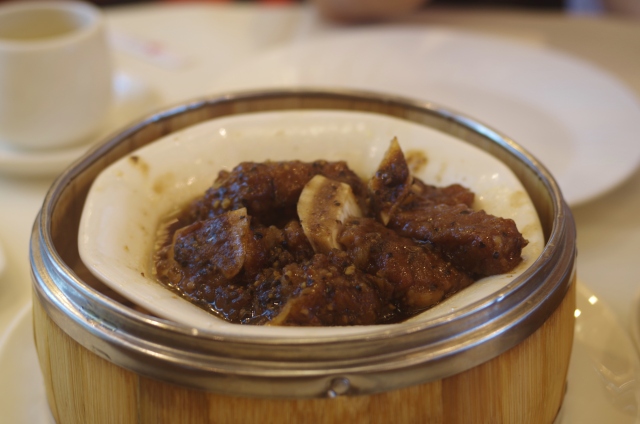 My Chinese isn’t horrible, but it isn’t great either, so often I had trouble understanding the names of dishes. The sirloin on the bone was chosen for this dish, which I was a little surprised about. Since, it was rare to see a primary cut used for slow cooking. Regardless of primary and secondary cuts, the meat was very tender with the black pepper sauce serving to compliment the beef flavour instead of overpowering it.

I was in awe of the intricacy and detail of this dish. Radish was julienned and stacked neatly into a rectangle then set together with light batter to form this radish cake. The radish cake melted away in your mouth like a puff of cloud, complimented by the saltiness of the cured Chinese ham and the umami of dried scallops.

One of my favourite pastries has to be the Durian puff, so I ordered it where ever I went. Durian is an acquired taste and it was not love at first sight for me. However, the courtship was relatively fast, so by the second time I was addicted to its pungency and creaminess. Fresh creamy durian paired with flaky buttery pastry mmm….there is no need for me to say more.

I love egg tarts and have had my fair share of them. I do not even have to hesitate to declare these as the best I’ve ever had. The milky curds were the creamiest I’ve ever tasted, paired with the shattering buttery casing I was in heaven. Though I’ve always thought that Portuguese egg tarts used shortcrust pastry and not puff pastry, but who cares about the name when these babies were just that good.

These looked pretty ordinary when they appeared, sliding all the way to the side of the bamboo steamer. You can’t always judge a book by its cover and wiser words cannot be said about these. I enjoyed the restrained sweetness of the black sticky rice giving way to a very nutty and rich filling. At first I thought the filling was like a sweet walnut paste, but I was surprised to find at the end of the meal it was actually mung bean. It was my first time trying these sweets and I must say it turned me into a huge fan girl: swooning and smiling after each bite.

Considering the amount of excellent food we had and the thoughtful service we received, our meal came to a very cheap 211 yuan. 211 yuan is on the pricey side for yum cha by Shenzhen standards, but it is only about $35 AUD, which screams bargain in Melbourne. I thoroughly enjoyed my lunch at Phoenix House and from now on this shall be the yum cha restaurant that all others will be measured up against in the future.

If you would like to drop me a word